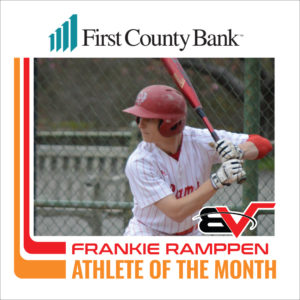 Our First County Bank Athlete of the Month for November is 17 year old Frankie Ramppen IV.  Ramppen who was born into a baseball life has been a member of the B.V.S.A. family since the inception of the academy. However, he spent years 2-8 in Japan getting to experience pro-ball first hand because his father Frank was a professional coach for the Chiba Lotte Marines with Bobby Valentine. One of Frankie’s famous lines that he learned over in Japan and would say to anyone who would listen is that, “he was born to play baseball.” He surely was because as soon as he could pick up and swing a wiffle bat the fire and passion for the game began. Although he would swing both lefty and righty because his favorite player was a switch hitter which made him a dynamic player even at that young age. Frankie now is a Senior at New Canaan High School and a captain in his final season. The intense and fiery competitor will be a starter for a fourth straight season and will look to lead his team to be competitive in the FCIAC.

Ramppen is primarily a center fielder who can pitch as well and will be looked upon heavily in his senior season. But before New Canaan and Fury baseball for the academy, Frankie got his start in local parks in Japan. This was the site where the Baybuster little league teams would practice and play for hours on end. When the Ramppen family returned from Japan, Frankie continued his development of skills and baseball IQ through Cal Ripken in New Canaan and the Fury teams at the Academy. Frankie’s abilities skyrocketed as he played up for B.V.S.A’s Fury teams and learned from all the coaches/instructors available to him including his father. His passion and love for the game only grew stronger through the years because of getting better, winning, all the accolades, and above all else the fun that the game was and still is. One early accolade that stands out above others is the selection to the Under Armour National Future Stars team in Aberdeen, Maryland at the age of 12, which is also when he got to play on national TV. A former Fury coach had this to say, “Frankie is one of the most intense players, I have ever had the privilege of coaching. His determination to win is unmatched and separates him from other players.”

Frankie continued to produce once he hit the big field and did not skip a beat. Only thing that changed is he had more space to make plays in the outfield continue to look effortless. Once Ramppen arrived at New Canaan High School his skill level was clearly above others there, and the head coach at the time knew it. Frankie as a Freshmen batted 2nd and played centerfield for a good Rams varsity baseball team. To this point now a 3 year, Varsity starter who has hit above .300 every year, which includes batting .458 last year as a Junior his ability only grows as the years go on. He additionally earned All County East honors in both his Sophomore and Junior years. Frankie earned two local scholarship offers after his Freshman year but had dreams to go play south. Ramppen made those dreams come true as he committed to play at Palm Beach Atlantic University in Palm Beach, Florida.

Ramppen outside of baseball is a committed student and maybe an even more committed Raiders fan. His burning passion to be good at whatever he does or whoever he roots for can be heard when you talk to him. Here at B.V.S.A. we have been fortunate enough to be a part of and witness the growth and development of Frankie not just as a player but as a person. He will be missed when he goes off to college the following fall and we want nothing more than to see him have a great Senior season and an even better college career. Coach Anthony Conte had this to say, “Frankie has an intense will to win and is fun to watch play! His jumps, angles, and his catch to release in the outfield are special.  He’s a true switch hitter and a menace on the base baths. Doesn’t really see himself as a pitcher yet but he’s a lefty who can chuck it on the bump. He knew he wanted to play down south and we are pumped that he trusted his gut! We are all very excited to see what he does at PBA over the next few years.” We cannot wait to see what he accomplishes in the near future!