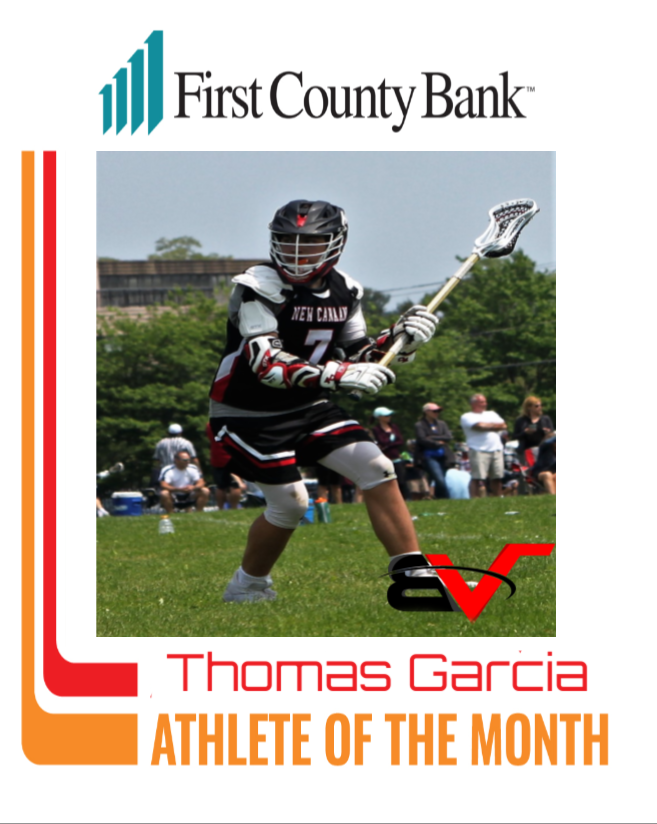 Our December, First County Bank Athlete of the Month is 14 year old Thomas Garcia. Garcia is truly a dedicated athlete who puts maximum effort into all his endeavors. Which is why he being recognized with this honor was such an easy decision for Andy Towers and B.V.S.A. management. A ferocious athlete with an intense drive to be the best he can be in any drill, practice or game. However it should not go unstated or unappreciated that even though Garcia is a high level lacrosse player, his passion and drive to be great in all sports comes from an appreciation for the camaraderie created with teammates. Having a common goal and love for team and teammates’ success separates him from others.

Garcia who is only just an eighth grader has a diversified portfolio in the sports he has participated in and the experiences he has had in each. For starters Garcia has been a contributing member of New Canaan’s top lacrosse team, the highly competitive Eclipse 2024 AA team for six years now. A two-way midfielder who takes face-offs has helped lead this team with the direction from great coaching. But he is only that much more prepared due to the rigorous, intense, and high-level training down here at BVSA in the winter with Andy Towers. Towers who runs Lacrosse Draws and is the head coach of the Chaos in the PLL had this to say about Garcia, “Thomas Garcia is my choice for the First County Bank Athlete of the Month. No one works harder in our program and no one is more consistent than Thomas. This kid truly exemplifies everything that a college coach is looking for in a prospect as it relates to focus, effort, and grit, and most importantly being a great teammate.” The summer was no different for Garcia, his U-13 Eclipse 2024 team qualified to play in the World Series of Youth Lacrosse in Denver, Colorado. He also played in the National Lacrosse Federation tournament where he and his team excelled. Another highlight for Garcia was in 2018, he was named a 2018 CONNY Allstar by the CONNY Coaches, Competition, and Committee.  It set him up to play in the 25th Annual CONNY East-West Allstar Classic at Yale University’s Reese Stadium where he proceeded to tally two goals, two assists and several ground balls.

However, it is important that it does not go understated that Garcia is a student-athlete. While playing lacrosse he also participated in football, wrestling, and baseball being a standout or a major contributor in all these sports as well. But away from the playing fields Garcia maintains a 4.1 GPA (weighted) for his coursework and shows the same level of determination to be great there as well. Garcia is also a member of the Model United Nations, as well as a volunteer at St. Aloysius Church and as a coach for his younger sister’s basketball team. With all of these factors only favoring the hard working Garcia he does not have set plans for college yet. All he would like is to attend a school such as Stanford or Williams where it is academically competitive and he can continue his playing career. Everyone here at BVSA, Coach Andy, Coach Pete and all his teammates look forward to seeing what he is able to accomplish in the near future!