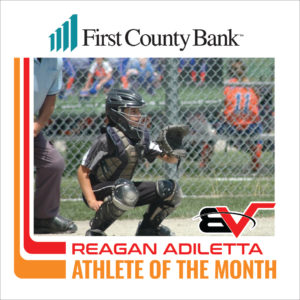 Our First County Bank, October Athlete of the Month is 12 year old Reagan Adiletta. Adiletta is undoubtedly one of the most dedicated softball players in the facility, but this is only a piece of why she was selected. A member of the 7th/8th grade Lady Titans team, at least one lesson a week, assisting in the 9th grade practices and catching bullpens for teammates during their lessons is part of the amazing work ethic that separates her as a player. Adiletta is driven, competitive, and passionate as a player but an amazing teammate willing to go the extra mile for each and every one of them. One of her coaches Ashley Simoneau had this to say,  “Reagan will outwork every single player on the softball diamond no matter their size or ability. Her determination, work ethic, and pure grit makes her a joy to coach. She is a very versatile player that will adapt to any position you put her at however, she shines behind the plate as she commands control of the game.”

Adiletta is primarily a catcher who has the ability to move around the diamond with ease. Before becoming a Lady Titan, Reagan played for Darien Little League where her teams won 3 consecutive house championships and she was part of  2 District Championship teams. This winning pedigree and love for the game stemmed from watching her older brothers play baseball, sometimes watching 8 games a weekend. So it is no coincidence that when she finally started T-Ball at 5 years old she took to it and never let go. The love for catching and donning the tools of ignorance did not happen as swiftly. But at nine when her coached asked her to try catching the burning passion to be the best catcher possible had sparked. Reagan also passes her knowledge and passion on to younger players in the town of Darien as well. Coach Elizabeth Joseph said this about her, “Reagan is a very dedicated and passionate player that is always willing to learn. She comes to every practice wanting to get better. Reagan is a small but scrappy, aggressive player that can get the job done. Whether behind the plate, at shortstop, or in centerfield, Reagan has the ability and talent to make some incredible plays.”

Reagan is currently a student at Middlesex Middle School in Darien where she maintains straight A’s. Her favorite is math and has the goal of becoming a civil engineer. Adiletta is also an excellent swimmer who competes for Country Club of Darien and Darien Piranhas. She excels in the Freestyle and Backstroke, with her favorite event being the 200 Freestyle. Reagan also shows her compassionate side for animals as well, none more than her dog Preston. Adiletta has done an amazing job exemplifying what it takes to be an Athlete of the Month. That is why BVSA management and each Lady Titan coach were so ecstatic to recognize her with this honor. We all are looking forward to seeing what Reagan can achieve both on and off the field.

Coach Lauren Delgadillo – “Reagan is a dedicated athlete who strives to get 1% better each day that stems from her passion to win. She not only shows how good she is on the softball field, but shows how good she wants to be. Her hard work, passion, and dedication sets the example of what it takes to be a successful athlete. Reagan has been and will continue to be such an important part of the Lady Titans organization.”