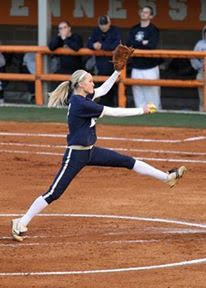 Shelby Morris will be joining the Bobby Valentine Sports Academy family this August and is now accepting private pitching, hitting, and fielding lessons. Shelby recently moved to Connecticut after an impressive softball playing career and 15 years of coaching experience in Tennessee. Most recently, Shelby coached alongside professional athletes and collegiate coaches in both baseball and softball at RBI Tri-Cities in Northeast Tennessee.

She brings years of personal experience from the mound as a Division 1 pitcher for East Tennessee State University. At ETSU, Shelby obtained a full academic and athletic scholarship with accomplishments including four years of being a part of the All Academic Team as well as pitching in ETSU’s first ever combined perfect game (2009). She made a path for her time at ETSU with a 78-23 record at Mt. Juliet High School, just outside of Nashville, Tennessee. At MJHS, Shelby was Tennessee’s 9 AAA MVP in 2006 and 2008 and was part of the state runner-up team in 2006 and 2007. Shelby also lead her team as a pitcher for the first ever Mt. Juliet team to go undefeated for 9 AAA her senior year. In her years in high school she was on the MTSCA All Mid-State First Team (2008), Second Team (2007 & 2006), North AAA All Star (2008), and the All Tennessee Team (2008). Finishing up her senior year of high school season, Shelby left her mark on the travel-ball world as the MVP for the USFA World Series Championship Team in 2009.

Not only has Shelby been working with athletes in private lessons for over a decade but also decided to take her love of working with young people to pursue a Masters of Arts in Teaching and has been a middle school science teacher for five years. Alongside working for Bobby Valentines’ this year, Shelby is an adjunct professor for her alma mater, ETSU. Shelby is enthusiastic to begin a chapter of coaching Connecticut’s young softball athletes and will begin booking private lesson immediately. Contact Bobby Valentine Sports Academy to book a time slot with Shelby.