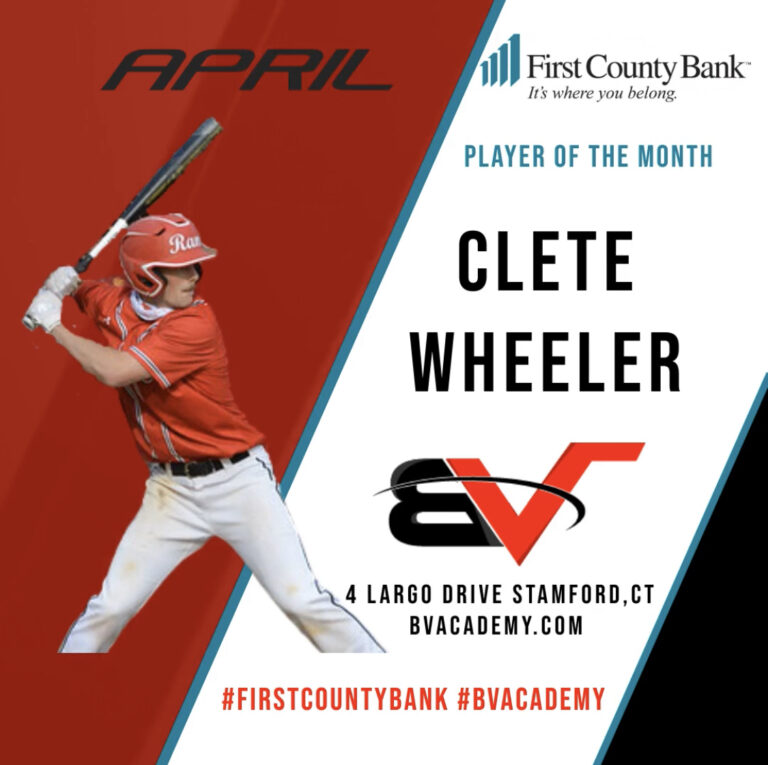 Our April, First County Bank Athlete of the Month is 18 year old Clete Wheeler. Wheeler is a true standout amongst his peers. A genuinely nice person,  with an unmatched motor, and a player every coach dreams of having lead his team.  A member of the BVSA community since his family moved to New Canaan many years ago. Wheeler became even more rooted into BVSA when this past year he started as instructor on top of his busy schedule. Wheeler’s daily routine would consist of church, school, baseball, work for the academy, and then school work. He does all of it with a positive, fun loving attitude.  This makes each endeavor that much more worthwhile because it serves a greater purpose.

Wheeler is currently a senior at New Canaan High School and a Captain of the Varsity Baseball team. Serving as their starting Shortstop, Wheeler can play every other position on the field, as well as pitcher. This dynamic and versatile ability makes him so valuable to the Rams roster.  Clete can do it all above the level of an average high school player.  His Head Coach, Anthony Bloss has this to say, “Clete is one of our 4 captains and has been a leader both on and off the field. He leads by example and takes ownership of his performances. His teammates respond to him in a positive way, and he is always smiling and encouraging.”

Wheeler started this journey back in Utah as a first grader when he initially picked up the glove and bat for the first time. His development and passion for baseball has only grown with each passing year no matter the state he was in. Wheeler joined the NC Select Rams when the family moved to CT and immediately integrated himself into the program. The then 11 year old Wheeler would become a main stead of New Canaan baseball as well as our own Fury baseball program for many years.

Wheeler has trained with Coach Frank Ramppen of Ramp3 Baseball at the Academy, on top of all the teams through the years.  He credits a great deal of his development to the years spent in the cages with Frank honing in and making the adjustments necessary to improve his game. Frank had this to say, “Clete is so deserving to have been chosen as athlete of the month.  He has been my hardest working student over the last 6 years and has developed into a great player. He trained 2-3 times a week throughout the year, regardless of his busy schedule but that is such a small part of the big picture.  Clete is one of the greatest young men I have ever had the pleasure to meet. He has accomplished so many things in his young life but most importantly exemplifies how a young man should behave.  I have never seen Clete in a bad mood.  His infectious smile and kind, energetic personality are so consistent, so uplifting and so present. I can’t wait to see how many more great things he does in his life and how many people he will make better around him along the way.  Congrats Clete!!!”

Wheeler has and continues to be multi dimensional as an athlete and as a person. His athletic endeavors prior to his junior year was that of being a football player and a wrestler as well. Two sports that take unwavering commitment, breed a brotherhood mentality and build your character as an individual. Wheeler is a 3-time state champion for football, twice in Utah and once here in Connecticut with New Canaan. He is just as dominant in the classroom as he is on the wrestling mat, on the football field or on the diamond. Wheeler maintains a 3.7 GPA and plans to major in finance at Brigham Young University in Utah this upcoming fall. But, what is likely the most defining part of who Wheeler is an athlete, a student, and as a person is his religious backing as a devout Mormon. It is such an integral part of his everyday life but he plans on serving a church mission for The Church Of Jesus Christ of Latter Day Saints after his freshman year of college to help spread the word of Mormonism.

If you have the pleasure of having Clete Wheeler in your life in any capacity, you are likely better off for it. There is some impact and lasting mark from your interactions with Wheeler.  He embodies what we hope all of our athletes can and will be in whatever endeavor they choose to put time and effort into.  We couldn’t be more proud and excited to be able to award him this honor and recognize Clete Wheeler as not just an athlete but as an individual. Looking forward to seeing what he can accomplish in the future as we know great things are on the horizon. 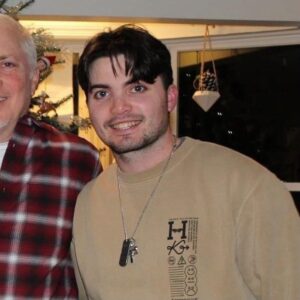