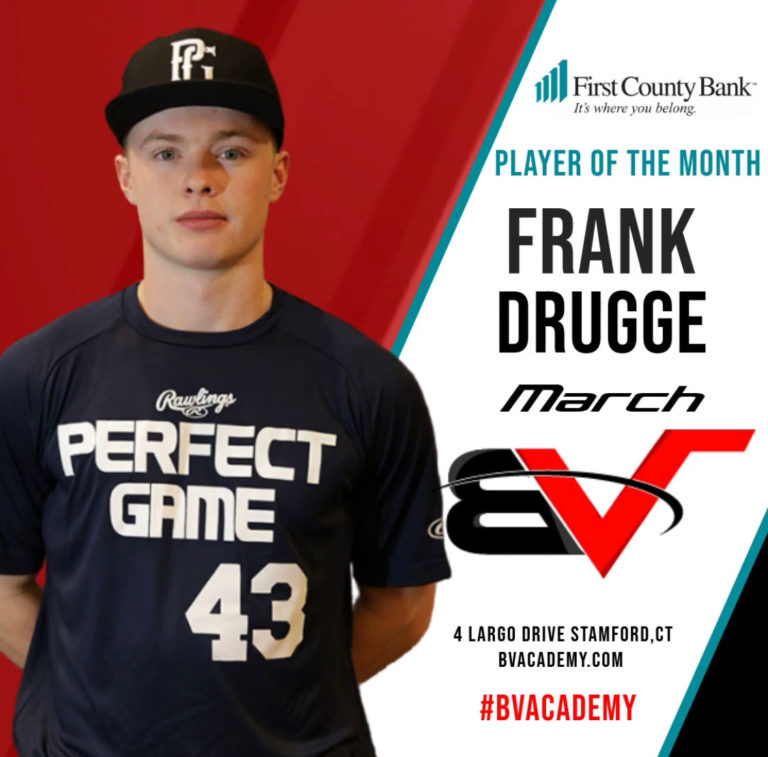 Our March, First County Bank Athlete of the Month is 16 year old Frank Drugge. Drugge is one of our hardest working and dedicated athletes that come through BVSA on a daily basis. Even on the last day of business before having shut down due to COVID-19 he was in the cage on his own getting his work in. Drugge is consistently the first player at practice (early) and the last player to leave practice (late).   He does this all in the efforts to work more than what is required of him.  He is a very smart player, who goes out and completes on every pitch, and someone his teammates know will be there for him. Drugge is currently a Junior at Darien High and is hoping that all this hard work won’t be for not and the spring season can get played.

Drugge is a versatile player who can play anywhere that is needed other than catcher (can’t hurt to ask though) and he pitches as well. However, he has been playing a multitude of sports for most of his life. Drugge has been playing baseball since he could walk and continues to show the same drive he had as a child to excel to this day. In addition, soccer was a lifelong passion of his until this past fall when he chose not to play for the high school. Drugge actually played for Jhonny Arteaga of JA Elite, our soccer partner here at the facility. Drugge also picked up indoor track this past winter and made FCIAC’S in the 55 meter dash.

However, he is more than just a dedicated athlete. Drugge is another great example of the student-athletes we have at BVSA. Currently maintaining a 3.72 GPA, while in BC Calculus and AP Calculus-based physics Drugge is an active member of National Honor Society, Math Honors Society, and Music Honors Society. Additionally music is his other passion in life, something he is thoroughly engaged in as he is Darien High’s lead trumpet in their jazz band (2nd year) and Norwalk Youth Symphony’s principal french horn player (1st year). With all this going on in his life and him working as hard as he does for baseball, time management is definitely a skill Drugge has shown.

With the high school season still up in the air, we can only hope to see Drugge in his Darien blues driving the ball to all fields.  But in the chance we do not get to see this, we at BVSA get to look forward to the summer Fury season with Drugge on our 17U team. Coach Anthony Conte has this to say, “As a coach, you are constantly forming relationships at all different levels with your players.  Drugge is a kid we took to many years ago when he made his inefficient mechanics work to his advantage. He was basically throwing a slider every pitch and having great success.  Drugge has come and gone over the years but has always been polite, focused and hardworking.  He has since fixed his mechanics, grown multiple feet and continued that “figure it out” attitude.  Drugge is well deserving of this accolade!  We are pumped to be coaching him this summer as he continues his quest to find the right high academic university.  I am especially looking forward to continuing to get to know and learn from this awesome young scholar athlete,”

Another great thing about Drugge is he will be successful in something.  Baseball, music, or something school related because that is just the type of person he is! Congratulations again on this honor, we here at BVSA are excited for his future and even more excited to be a part of his present.