Zack has always been different. Anytime you evaluate talent, the great ones have the ability to make the game look slow. In a world full of “size matters“ Zack makes those comparisons mute. This kid just knows how to play the game of baseball. He’s special and has the “it” we all look for in players. I have a great deal of confidence in Zack on being the best he can be. West Virgina is getting a great player and I wish him luck! 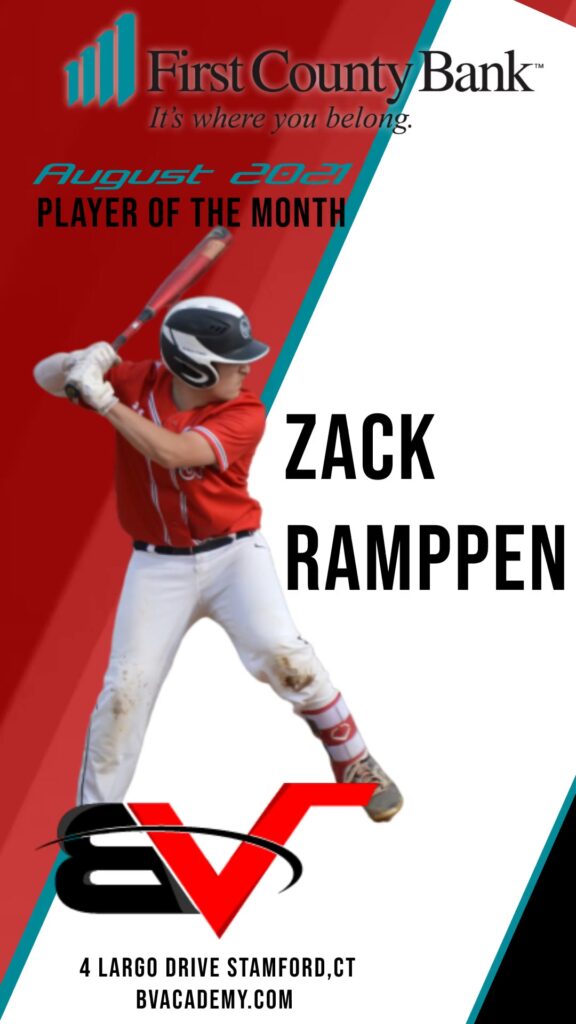 BV’s First County Bank Athlete of the month for August is Zack Ramppen, a senior at New Canaan High.  Ramppen is one of the most athletically gifted members of the BV Community.  He is also unequivocally one of the most unique personalities we have at the academy.  There is no other individual who is similar to Ramppen in his approach to baseball, his relationships with teammates, coaches, people in general, and life as a whole.  For those who have known Zack for the entirety of his time back state side since Japan, have had the pleasure of seeing him go from the little guy over at Camp Ave to the mature future Mountaineer headed off to West Virginia roughly a year from now.  His drive, determination, instinct and relaxed outlook on baseball allow him to not just compete but stand out amongst his peers and opponents.  Headed into his Senior year as a captain of the baseball team at NCHS, this being his 4th year on Varsity – Zack is ready to make an impact on the field with his play, and more importantly as a leader of this Rams squad.

Ramppen is pretty synonymous with baseball in this area, so it isn’t too much of a surprise how in his blood baseball has been from the beginning. Ramppen spent his developing years in Japan while his father Frank coached with none other than Bobby Valentine.  So his second home was a stadium – not much more need to ingrain baseball into you.  Ramppen spent so much time in the stands, in the dugout and out on the field soaking up what it took to be a top level athlete.  Satozaki was Ramppen’s favorite player in Japan and the reason he wanted to start catching (an amazing decision that was).  It didn’t take long for Ramppen to display some unbelievable talent even at such a young age.  Between the fun had at the field and the seriousness of Japan’s little league baseball it gave the perfect opportunity for Ramppen to start developing.  Once the Ramppens came home he picked up right where he left off, New Canaan baseball and the academy didn’t know what hit them!  Everything about him was different; the little things clicked so much faster and with ease then for others.  This was clear for everyone he was exposed to, including long time BVSA employee Tim Giuliano, who had this to say:

“Zack is one of those players who clearly makes a physical difference on the field. But the beauty of his ability is not realized until the car ride home. As you reflect on all the little events that influenced the game it’s obvious that not only is Zack involved in every moment, he creates the pulse of the game.“

As Ramppen got to the high levels of Ripken in New Canaan and even in his early years on the big field his play never skipped a beat.  Ramppen always found a way to affect the game – offensively, defensively, on the bases, or simply as a teammate (and is still the same to this day).

It didn’t take long for heads to turn once Ramppen walked into New Canaan High.  His impact much like his older brothers was going to be felt on the baseball team from year 1 as a freshman.  That is exactly what happened, Ramppen made Varsity as a freshman and started the first three games at third base until he took over behind the plate.  Ramppen showed out and brought an energy to the team, one of youthful exuberance along with leadership that would go a long way for future years.  Unfortunately, there was no Sophomore year due to COVID but the comeback Junior season was definitely one to write home about.  Ramppen lit up the field, leading his team in nearly all offensive categories (if not all of them) and was an exemplary leader amongst a relatively inexperienced Varsity squad.  What separated Ramppen throughout the entirety of the FCIAC though, was his stellar play behind the plate.  Controlling the pitch staff, limited past balls, and a non-existent running game against it was clear the level he was playing at.  This led to being named to the All-FCIAC East team and being drafted in the CT Fantasy Baseball draft.

The momentum steamed rolled into the summer as Ramppen, in his first summer playing Time To Sign, continued to stand out and garner recognition.  Between his coaches, his teammates, opposing coaches, and opposing players it was clear to all Ramppen came to play.  Play he did. Ramppen during his first tournament in Georgia got noticed by the right eye.  For four straight days the West Virginia scout came back to see how Ramppen was going to not just impress but top his performance from the previous day.  It was not too long after the offer was extended and accepted to commit to playing at West Virginia University.  Founder of Time  To Sign, Berg Ohanian had this to say, “How lucky are we as coaches to have a player like Ramppen – plays it the right way 100% all the time. From a good baseball family, and we can see why Zack is so good. It was a pleasure being around and having this kid with us. Bright future ahead.” It has all come together for the once little guy who used to be running all over the academy having a blast and now will get to pursue his dream of playing Division One college baseball in the Big 12 Conference. Taking him one step closer to reaching professional baseball.

Outside of baseball Ramppen is a dedicated student and has been able to achieve making honor roll every quarter of his high school career except for one.  It’s this commitment that makes it so clear that when Ramppen sets his mind to what he wants anything is possible.  His ability to stay cool, calm, and relaxed under pressure only allows for the game or whatever endeavor he takes on to slow down so he can reach the highest.  We are proud to have such a great person (more than an athlete) representing B.V.S.A.  The future is so bright and we cannot wait to see what he is able to accomplish!