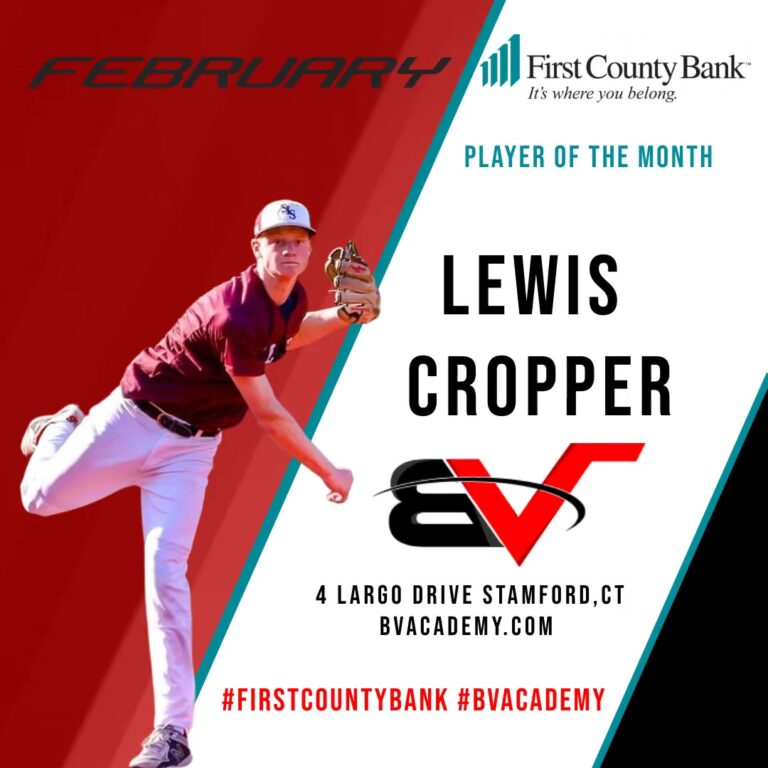 Our First County Bank Athlete of the Month for February 2021 is Lewis Cropper. Cropper is a 18 year old Senior, captain at St. Luke’s School in New Canaan, CT. Cropper has blazed his own path both at the school and in his respective sports. He is an athlete who enjoys going the extra mile after going a few already to make any improvement he can. A long time member of the BVSA community, Cropper was a main stead for years in the Fury program. Great to see his years of experience shine through as he leads the SLS Baseball team in their Winter Workouts prior to this Spring season. It is this exemplary work ethic that makes him a great fit for this honor.

Cropper will be featured all over the diamond this coming season as he not only pitches but plays shortstop, third base, and first base. This versatility is part of what makes him so valuable to his team. Coach Sam Colon this Spring. Colon had this to say, “Lewis Cropper is an amazing young man.  He embodies the student athlete players should model themselves after.  His hard work on and off the field, along with his leadership abilities makes his teammates and coaches the luckiest people.” It is also something that Kenyon College took notice of! Even though he committed there to pitch, Cropper standing at an impressive 6’4” is an athlete and his athleticism only makes him that much more valuable 60 feet 6 inches away in between the white lines.

However, this hasn’t always been the case for Cropper who has gone through his own trials and tribulations to get where he is now. Cropper started his playing career back when he was 5 years old, in the little league of his hometown of Wilton, Connecticut. Cropper played through little league and the early years on the big field with some success, but the big event that changed the course of his playing career came in his Freshman year. He was cut, which altered not just where he decided to play the next year, but his work ethic as a whole. Cropper transferred to St. Lukes School to repeat his Freshman year and recommitted himself to improving his entire skill set. Coach Conte, Fury Director, had this on full display both as Cropper’s former coach at St. Lukes, his coach in Fury for sometime and an important mentor in his college selection. This past summer of 2020 he posted a 1.98 era over 36 and ⅔ innings, absolutely astounding numbers coming off a COVID pause period.

“I will always remember the first day I met Lewis and his dad upstairs at BVSA.  Lewis had just been cut and was looking to possibly transfer to SLS.  Immediately, you could see by his work ethic, focus, and gangly movements, he was set up for serious future success.  Have to shout out Marc Fraioli for bringing Lewis into our lives that day.  Seems weird and awesome that I get to say this two months in a row but Lewis is the kind of player/person that makes the people around him better. Looking forward to watching you dominate the FAA this spring and bring your amazing energy to Kenyon over the next four years!!”

As Cropper describes, “it was the wake up call for me, and I realized that I needed to spend a lot more time getting better.” What separates Cropper from the rest goes way past baseball though. Basketball is also a passion he has and excels at. A now two year captain of the baseball team (3 year starter), Cropper has played Varsity basketball all four years at the school. As a Junior prior to COVID he was a starter, the team won the FAA championship and this year was named a captain of that team as well.  Head Coach Tony Newsom had this to say about Lewis, “It has truly been a pleasure coaching Lewis. He’s an outstanding young man with a great work ethic. He is a selfless individual who has earned the respect of his teammates and coaches with his leadership. I’m excited to see what the future holds for Lewis!”

Additionally, Cropper excels in the classroom knowing that building knowledge and continuing to learn is what can make him more successful on the field and after his playing career is done. He finished with a 4.0 for the first semester of his senior year and knows exactly what he wants to do at Kenyon this fall. He plans on majoring in economics, with the goal of becoming a successful entrepreneur in the years following school.

Lewis Cropper though is a multi-dimensional person who is much more than just the athlete he has been described as. During quarantine he took up yoga and is now said to be hooked on it, he does it everyday without fail. Lewis is also a member of the Investment Club at school, he is learning a ton about stocks and business practices. But, one of the great things he is doing is writing and journaling. Not just every start he has but big things he is learning in his efforts to continually be improving himself. We here at BVSA are so happy to be able to give him the honor because it is so earned and deserved for his constant efforts. Kenyon College should be excited about getting not just a player but a person like Lewis Cropper. We are excited to see what he can do with this opportunity and wish him the best of luck.

Early season action shots of our own Lina Welch! A

A little late to the party but the congratulations

Special day in baseball today as the league honors

Congratulations to Carlos Rodon on his first caree

Eventful game for ZRamp this past weekend! Take a

So excited to highlight this kid! Luca has been cr

Congratulations to Joe Musgrove and the San Diego