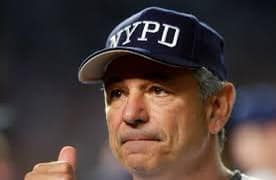 Seventeen years ago today, a very quiet morning turned dark as the tragic news spread. At 8:46am the North Tower was hit and just seventeen minutes later the second tower was struck sending a mixture of emotions through every American’s being. Before an hour had passed since the first impact the Pentagon was hit and the fourth plane crashed into an open field. The horrific event now over, a feeling of sorrow sweeping the nation, and it was now time to start the restoration of a city brought to the brink of darkness.

Bobby Valentine, the then Mets’ manager expressed the same sentiment that many felt that day. “Fear, I think, was the first emotion, and sadness, and then a couple days later I think that anger started coming out. But the bus ride was surreal. That’s the easiest way to put it. It was something I hope I never have to do again, but it’s a lasting memory. I’m on that road often when I’m in New Jersey, coming back, and I always look at Manhattan at the exact same point that I looked at it in 2001, and the image lives on”, Valentine stated only days after the event. Valentine was the first Met to visit Ground Zero as he traveled down in a police cruiser that had alterations made to be able to carry down more supplies for first responders. When Bobby returned from the initial trip down he shared his experiences with the players and coaches.

Valentine said, “It had me experience fear at a level that I had never experienced, It had me experience anger at a level I never experienced and it had me experience sadness, again, at a level that I never had before. And then there was the confusion of what to do. And everyone in New York and the surrounding area, and I think a lot of the country, had that same dilemma. Do we go down to the recruitment center and sign up? Do we lock ourselves in our house? Do we lend a helping hand to those in need?” Even with the mix of these emotions Bobby lead the charge as the Mets helped in the relief efforts any way they could. Mets cleared debris and helped those in the surrounding area victimized by the tragedy. John Franco the Mets closer was quoted, “Bobby was a great leader, He had us out there, and even when we were done, he stood out there by himself helping everybody else, all the volunteers. It wasn’t something we were ordered to do, either. We wanted to do it, we wanted to help, and once a couple of us got the OK to go downtown, we went downtown — Bobby, John Stearns, myself, Al Leiter, Robin Ventura, Mike Piazza, Todd Zeile. We wanted to go down there just to thank the workers.” This lead to an unforgettable scene as the Mets and the first-responders exchanged hats and those hats served as symbol for the Mets who would go on and wear them the rest of the season.

Valentine’s relief efforts much like the first responders did not end on that day. As the Mets returned to action on the seventeenth, the restoration continued. Bobby reminisces on the days saying, “It was remarkable the way they were met, the workers there were working on fumes, going around the clock, and we know how desperate it was and how impossible it was, what they were trying to achieve.” Bobby would continue to give in anyway he could including adopting a family which he would help sparing no effort. Bobby took the Conroys in as if they were his own.

This is the man who we are fortunate enough to work for, the kind of person who will help you in whatever you need and never ask for a favor in return. He has an impulse to give as much as he can and continue to give without any expectation of a return. The horrific events only inspired him to give more and we should all use that as a reminder to do for others because it is the right thing to do. Bobby continues to lead by example through both the darkest and brightest of times. It is important to be thankful for his efforts and those of all the first responders who controlled their emotions and helped rebuild following the events back on 9/11.

There is a 90 minute special on ESPN tonight covering The Comeback Season at 7pm. Bobby highly recommends that everybody check this out if they can!