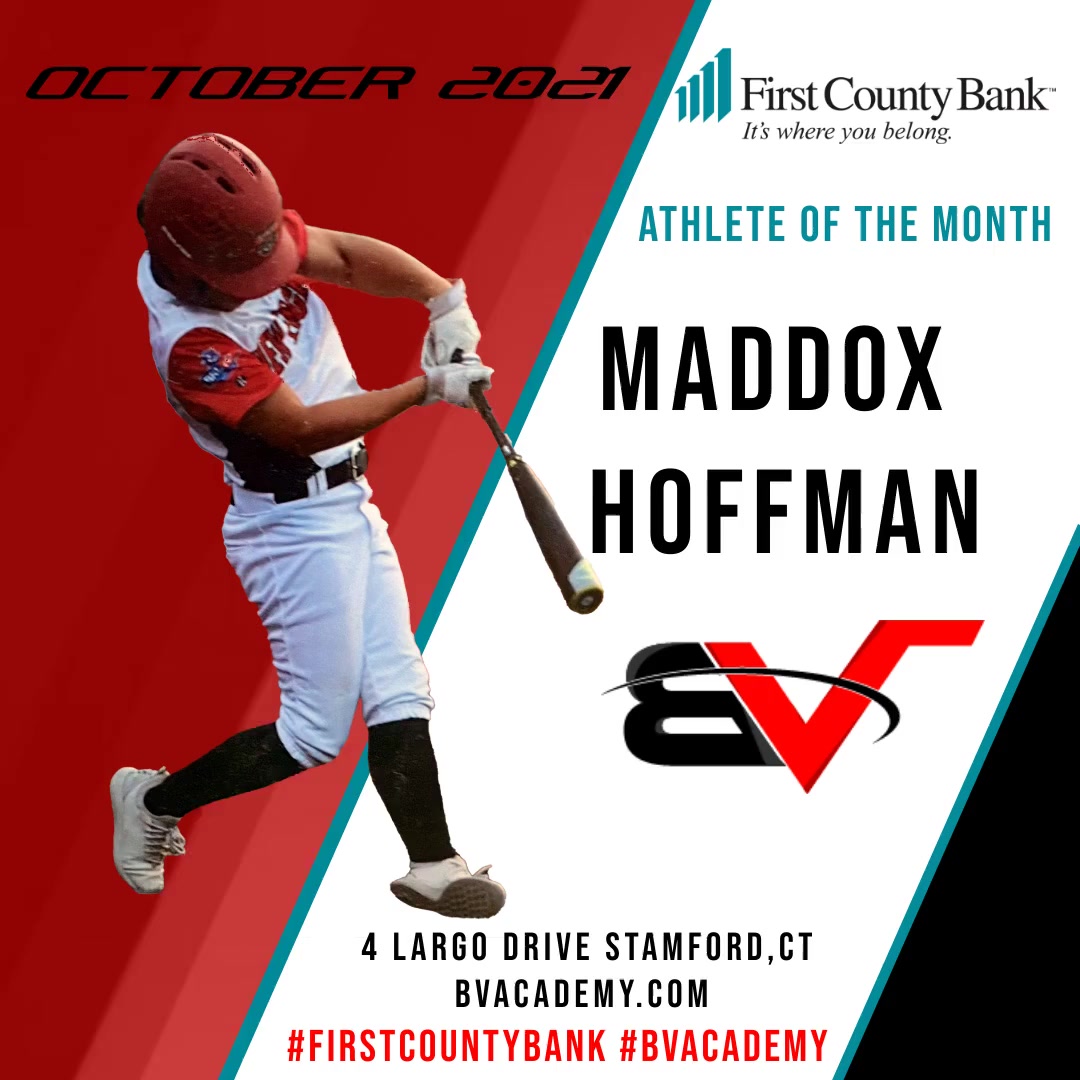 “I have watched Maddox play for a few years now and have had the good fortune to work with him over the last several months. Hoffman is an outstanding athlete who can do everything. His work ethic is unmatched and his desire to be his best is so evident. His knowledge of the game of baseball and of his own skill set is very impressive. More importantly he is one the finest young men I have ever met. Always looking to lend a hand, courteous and thoughtful of others around him and so mature for his age. I look forward to working with him and watching his career evolve, it has the potential to be very special!!! Congrats Maddox, well deserved!”

BV’s First County Bank Athlete of the Month for October is thirteen year old Maddox Hoffman from Saxe Middle School. Maddox, also known around friends, family, and teammates as “M”, is the definition of a multi-sport athlete. He prides himself on being exactly that as he steps foot on the baseball diamond, the football field, and the basketball court throughout the calendar year. His “down time” from all of that comes on weekends during the winter months where he laces up the skates and hits the ice for some ice hockey. Ask him which sport is his favorite and he will probably go with whichever one he just finished playing. Safe to say, he loves it all.

Baseball has been particularly kind to Hoffman recently. He was fortunate to be a part of a World Series team this summer, in which he pitched and played shortstop for the New Canaan Rams. He finished his 2021 spring and summer campaign with a remarkable .433 batting average in 134 at bats. Out of those at bats, he led the team in doubles with fourteen. His numbers certainly speak for themselves but his leadership on the field is what makes him stand out from the rest.

Just in case Hoffman’s baseball resume wasn’t impressive enough, he is also the captain of his seventh grade football team. What position does he play? Quarterback, of course. His team is headed to the championship game, with him leading the charge with his 1,000+ yard, 12 touchdown season. Did I mention he plays linebacker too? At this point is anyone even a little bit surprised? Hoffman was voted on by his teammates to be captain this season, and that honor and accomplishment is extremely well deserved.

“He is probably the best quarterback in our grade, and it’s crazy how he is always working so hard to be even better. He does a great job at being a leader.” – Henry Reagan, Football Teammate

Academics are just as important as what athletes do on the field, and Hoffman is no exception to that. He not only maintains straight A’s in the classroom, he takes it a step further. He has recently started community service initiatives in order to give back as he is very thankful for everything he has. On top of that, he also does baseball lessons for his two younger brothers, Cole and Brody, as well as with some of their friends too. Last but not least, he is in the process of launching his own baseball card business.

Success is something Hoffman is very familiar with so far in his young life. Success comes with respect for the game, leadership on and off the field, and becoming a role model for those that come after him. The leadership comes with a ton of responsibility and accountability. Hoffman has become that role model for his two younger brothers, giving them some big shoes to walk into as they continue to grow and get older as well.

“Maddox is one of the most consistent, diligent, and competitive athletes we have working in the building. At such a young age to be so conscious of the process it takes to become better and then dedicate the time to it is not just a given. This work ethic extends into the classroom and his side hustles as well and it is amazing to see, but more so be a small part of.” – Justin Virgulak, Assistant Instructor

We here at BVSA want to congratulate Hoffman once more on earning this honor of First County Bank Athlete of the Month for October! The hours of hard work and success on the field do not go unnoticed, and the leadership and the way Hoffman carries himself on and off the field are second to none. We are so excited to see what the future has in store because it is only going to get better from here! 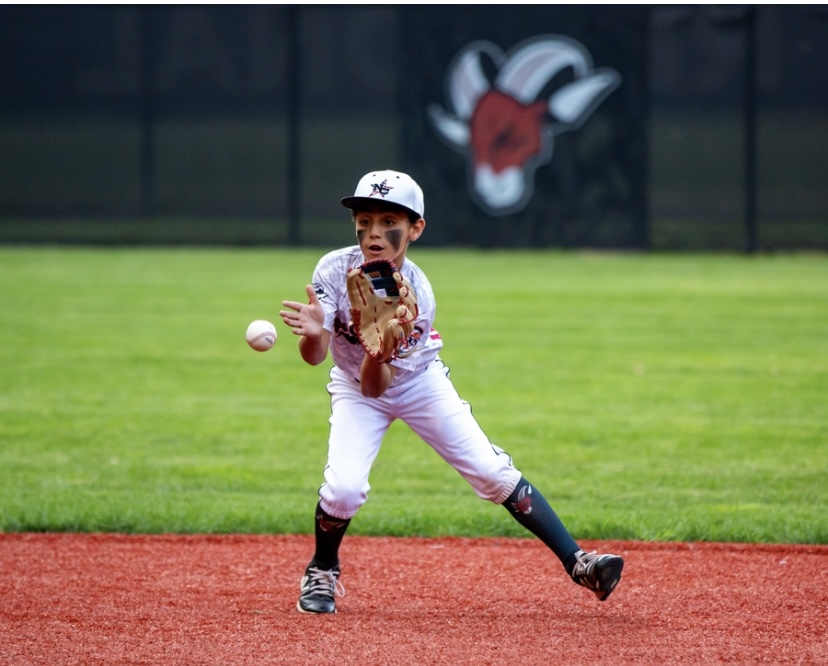 Our September, First County Bank Athlete of the Month is 10 year old Sammy Abdelwahab. Abdelwahab who is our youngest athlete to be recognized for this honor to date is easily one of the most deserving we have had. The young standout puts in the time and effort in like very few. Abdelwahab is either at the academy with Abate Training, with his team through NC Select, or on his own at home constantly working to be a better baseball player. What should not go understated though is the swag he walks through life with. Abdelwahab is easily noticed with matching attire for his favorite team, repping New Canaan, or any combination of loud colors which is reminiscent of a young Zack Ramppen (August FCB Athlete of the Month) at the old academy. Abdelwahab’s swag, confidence, and awareness to name a few, are qualities that help separate him from other players his age.

Abdelwahab is predominantly an infielder (shortstop specifically) who is also a solid option on the mound as well for his teams. He can get the job done no matter where you put him or how intense the game situation might be. This is only helped by the fact that Abdelwahab has been playing baseball since he could stand up. The game is in his blood! New Canaan Travel has been the beneficiary to this point of Abdelwahab’s abilities on the field, as a teammate, and as an example to other players around him. However, those skills are only improving as he moves into his third year of working with Abate Training. The results are becoming more and more noticeable. Recently Abdelwahab played in a Perfect Game tournament in New Jersey and lit up the competition. At the plate he went 7-9 (.778) with 2 home runs and 9 runs batted in and on the mound he was 2-0 helping his team reach the championship game. A stellar run of games that only help solidify what we can all see coming in his future.

Mike Abate had this to say, “​​Extremely proud of this young man. Just a young kid playing the game the right way. With addition to his MVPs and player of the month awards, to leading his team to both a state and regional championship. What you don’t see is all the hard work he puts in not only on the field but off. He plays the game with heart and a great deal of passion. This is the way it’s suppose to be played at any level! Keep working hard Sammy and these Home-runs will be the first of many!

Success is something that Abdelwahab is very familiar with so far in his young life. He has already been a part of two Cal Ripken state championship wins and regional title where he was recognized with the MVP award. He and his team will be headed to the Cal Ripken 10U World Series this coming summer, which is another chance for more to see his incredible skill set. With all this success though Abdelwahab is just like most other kids his age. When he is playing or working for baseball he is playing football and basketball with his friends. He is a mega sports fan – watching his Mets and Giants any chance he gets! Abdelwahab also enjoys fishing, video games, and playing with his younger brother. He is a good student who loves to read short stories but best to make them about sports, those are his favorites! When he grows up he wants to play baseball in Florida and then ultimately professionally but additionally wants to be a team doctor.

We here at BVSA want to congratulate Abdelwahab once more on earning this honor of FCB Athlete of the Month! The hours of hard work and success on the field do not go unnoticed. We are excited to see what the future has in store because it is only going to get better from here on out!