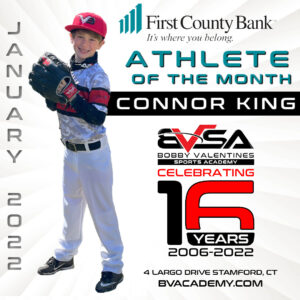 “Connor is one of the most exuberant and fun kids to be around in any setting at BVSA. From baseball to our All Sports Clinic, nobody is ready to learn while at the same time having a blast doing so more so than Connor. To top it all off, he has such an unique personality that sets him apart from his peers. He really is a pleasure to coach and be around, and there is definitely a bright future ahead!”

Bobby Valentine’s First County Bank Athlete of the Month for January is nine-year-old Connor King. Connor is simply everywhere, constantly on the move. He started his 2021 playing for the BVSA Fury 9u team, and then continued into the summer with Darien Little League. He played for the Darien AA summer travel team in the Friendship League where he competed against teams throughout Fairfield County. Heading into 2022, he’ll be playing for the Darien Blue Hawks 9U-A team and he could not be more excited.

Connor throws lefty and hits both righty and lefty. You read that correctly. He is probably the first switch hitter in the history of little league. The craziest part about it is that when you watch him hit from the right side and then the left side, you would not be able to tell which side is his natural side. He is THAT good and THAT comfortable from both sides of the plate. He is definitely a must see at BVSA. When we asked him about how he got into switch hitting, he said one day he just simply mixed up his left and his right and accidentally started hitting the other way. If only it were that easy for the rest of us.

“Connor brings positive energy to every practice and game, and always puts in the maximum effort to improve. He has taken huge strides in all aspects of the game, especially with his must see switch-hitting ability.”

When Connor is not playing baseball, you can find him on the ice. He plays for the Connecticut Junior Rangers 2012 Elite team, competing against the best teams in the country all year round. If not on the ice, he is on the lacrosse field playing for 2Way and the Greenwich Warriors.

Across all three sports, Connor is known for his work ethic, his coachability, and his overall positive attitude. He prides himself on being a good teammate and a good playmaker, and his selflessness is remarkable to say the least, especially at such a young age.

“Connor gets it in a way I’ve never seen most high school players understand. What I mean by “it” is a couple of different things. He comes into BVSA wanting to improve in all aspects of the game, both as a player and as a teammate. He demonstrates to other nine year olds, as well as to his little brother, the near impossible balance of hard work, fun, and some messing around with friends and coaches, and then how to put all three together. He carries himself with such a high level of respect, kindness, and genuine happiness. He is always just smiling and happy to be a part of a game he so clearly loves.”

Connor’s favorite teams include the New York Yankees and the New York Rangers, and he particularly enjoys watching Aaron Judge take the field and Adam Fox on the ice. In the classroom, he loves reading and math. He somehow finds the time for hobbies on top of the three sports, and those hobbies include reading, fishing, and golf. When he grows up, his dream is to become a three sport professional athlete. If anyone can accomplish that, it is definitely Connor.

We here at BVSA want to congratulate Connor once more on earning this honor of First County Bank Athlete of the Month for January. Both the commitment and the love for so many things at such a young age is impressive and flat out remarkable to say the least. Combine that with the respect and care Connor has for everyone, from his coaches, to teammates, to teachers, to his little brother, Chase, and it is safe to say we are beyond excited to watch Connor grow both on and off the field.